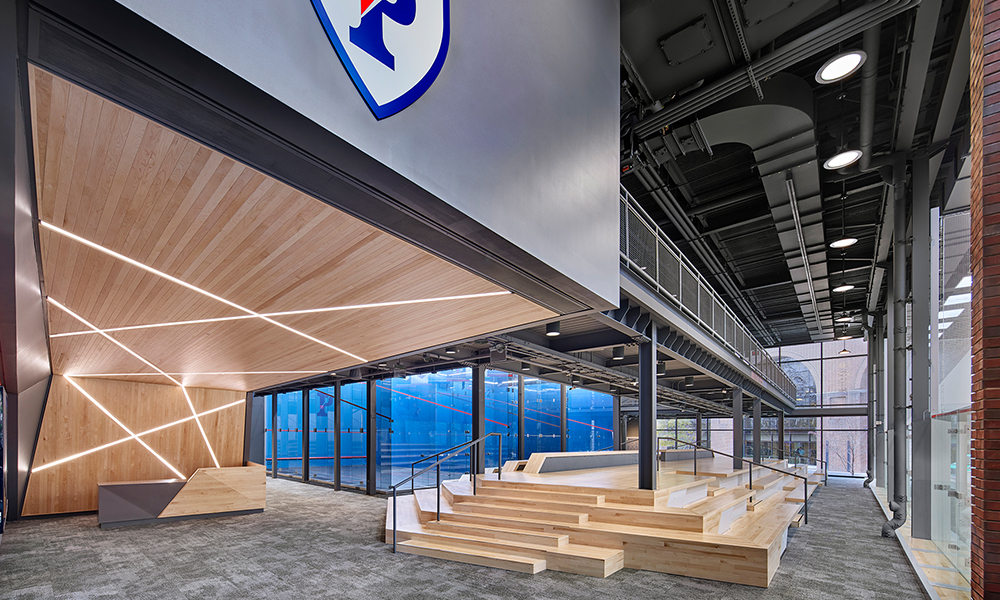 Posted at 21:23h in News by Zach Deritis

Philadelphia, PA (December 2021) – The design team at EwingCole took home two awards for its design of the University of Pennsylvania’s Penn Squash Center – an $18.7 million renovation and expansion of the campus’s existing squash facility. On November 18, the Penn Squash Center received the Honor Award for Interior Architecture from the AIA of Pennsylvania Architectural Excellence Awards. On December 2, Penn Squash received the Honor Award from the AIA Philadelphia in the category of Interior Architecture.

“One of the key drivers of this design was to celebrate and honor the legacy of Penn’s squash program within a facility that would serve as a catalyst for its future,” said Principal Designer on the project Andrew Donaldson-Evans, AIA, LED AP. “We’re thrilled to be recognized by our peers for our work on this project. We sought to create a world-class athletic facility and I believe we accomplished that.”

The design team’s mandate for the project was to elevate the space to a top-tier squash venue for Penn’s students and spectators that is emblematic of the program’s storied history. Constructed by LF Driscoll, the 27,000 square-foot facility improves playing conditions, modernizes the facility’s design, and is once again a fixture of Penn’s athletics program.

“The Penn Squash Center is a fantastic transformation of an existing, kind of, tough athletic space or athletic interior on this campus,” said AIA Pennsylvania juror, Kim Yao, AIA. “I think one of the things that really jumped out at us was this idea to create a communal center to the courts; something that feels inviting where people can hang out that feels multifunctional and it feels warm and that hub of activity creates the core for viewing and for training within the interior.”

The Penn Squash Center renovation completely re-imagines what a collegiate squash center should be, re-configuring everything from the plan to the structural frame to accommodate the way squash is played and watched today. The interior architecture largely preserved the industrial, utilitarian aesthetic of the existing structure while inserting highly tailored courts and millwork as focal points within the space.

The radical proposition of this design is the centerpiece of the tournament hall: a spectator island and mezzanine. Rather than place the two all-glass exhibition courts in the center, as would be expected in a conventional approach, the design features an inverse of the “theater in the round” concept, creating a dynamic social space and an unparalleled spectator experience.

About the AIA Pennsylvania Excellence Awards

Each year, AIA Pennsylvania celebrates the best of architecture in Pennsylvania and the people behind it. Through the AIA Pennsylvania Architectural Excellence Design Awards programs, more than 50 honors are awarded annually to AIA members, allied professionals, government and civic leaders, academic leaders, and nonprofit community service organizations. Each award is given in recognition of leadership and positive contributions to a better and more sustainable built environment and advancement of the profession of architecture.

About the AIA Philadelphia Design Awards

AIA Philadelphia’s annual design awards are more than just awards, they recognize the individuals and firms that are a part of the AIA Philadelphia legacy and toast to the future of the profession in Philadelphia.