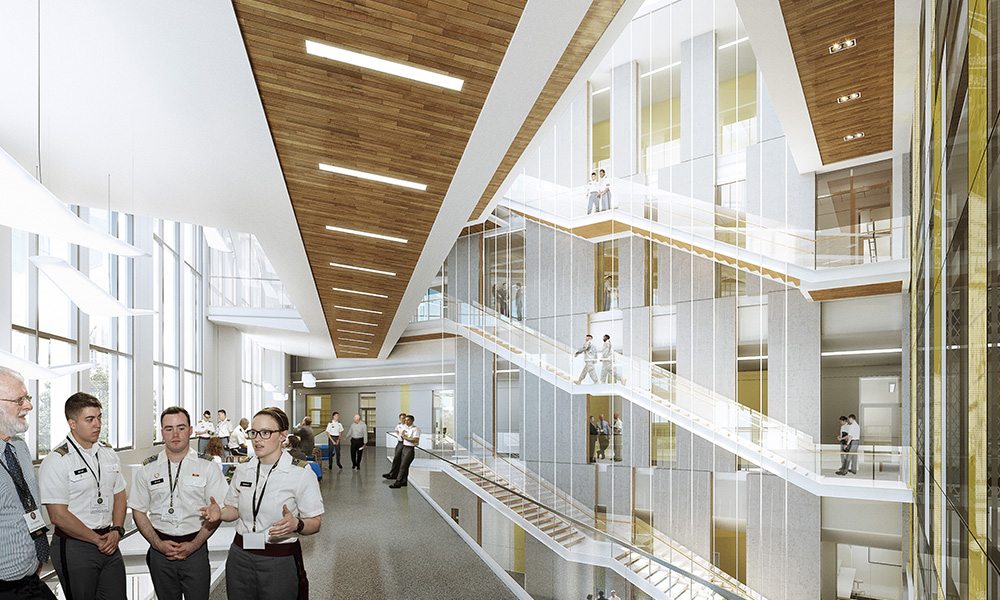 Posted at 22:55h in News by Zach Deritis

The Jacobs-EwingCole joint venture-designed CEAC marks the next chapter of mission readiness for the Army. The state-of-the-art, $186.6 million academic building is designed to support multidisciplinary project-based engineering education in science, technology, engineering and mathematics (STEM) for U.S. Military Academy (USMA) cadets at West Point. The groundbreaking ceremony was held at USMA ahead of the Army-Navy football game.

The CEAC facility is West Point’s response to a global evolution in warfare, with cadets receiving training in digital domains as well as on physical battlefields. The new center will equip cadets with the knowledge, skills and resources they need to succeed in an ever-evolving technological landscape.

“We’re honored to be a part of this historic moment,” said Jacobs Executive Vice President Ken Gilmartin. “The CEAC will support West Point’s leadership in the development and application of STEM-based solutions to address the most difficult global warfare challenges, while also supporting the U.S. Army’s cyber mission.”

Ken Gilmartin joined the following at the ceremony held at USMA; Commander of the United States Military Material Command; General Edward M Daly; Chief of Staff of the Army; General James C McConville; Chief of Engineers and Commanding General of the US Army Corps of Engineers; Lieutenant-General Scott A Spellmon; Secretary of the Army; Ryan D McCarthy; Superintendent of the US Military Academy at West Point Lieutenant-General Darryl A Williams.

The Jacobs-EwingCole JV conceived the design with a focus on innovation and collaboration, while also integrating the USMA’s traditions and history. The new CEAC will be the focal point of the enhanced gateway to the historic academic campus. It will be located at the intersection of Thayer Walk and Cullum Road. The design was the recipient of the 2020 Society of American Military Engineers Planning, Design and Studies Merit Award. John Capelli, principal at EwingCole stated, “The CEAC is a testament to the vision of USMA and the spirit of collaboration between USMA, the U.S. Army Corps of Engineers New York District and our JV team.”

The CEAC combines disciplined military thinking with innovative contemporary teaching methods, and its cutting-edge design will foster innovation, interdisciplinary collaboration and interaction among cadets, visitors, and faculty. The facility has been designed with flexibility and adaptability in mind so that future mission changes can keep pace with a rapidly evolving technological landscape.

Construction on the project is expected to be complete in Fall 2024.

Formed in 2016, the Jacobs-EwingCole JV has executed 28 projects in the past three years for the U.S. Army Corps of Engineers New York District and Naval Facilities Engineering Systems Command (NAVFAC) Southwest. Our integrated team offers full multi-discipline Architecture and Engineering Services on projects of varying scale, complexity and budget.