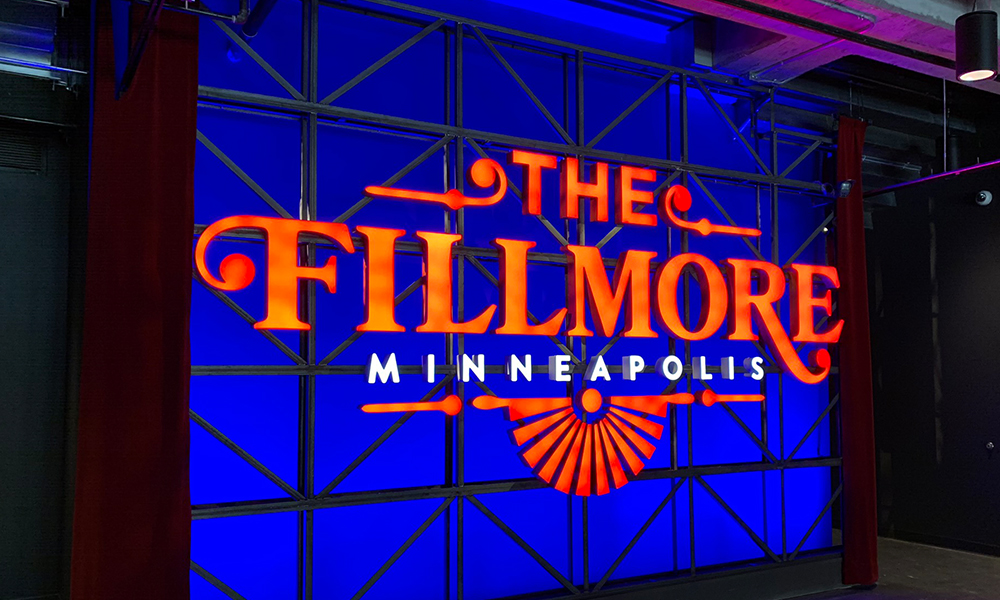 21 Feb The Fillmore Opens in the Twin Cities

Posted at 15:55h in News by Zach Deritis

The Fillmore Opens in the Twin Cities

Complete with the classic crystal chandeliers and psychedelic splendor.

Minneapolis, MN (February 2020)– EwingCole, one of the nation’s leading architecture, engineering, and interior design firms, is pleased to announce the opening of Live Nation Clubs & Theater’s Fillmore Minneapolis. Located in the Twin City’s vibrant North Loop neighborhood, concert-goers can expect a live show experience unlike any other in Minneapolis.

“We couldn’t be more excited to see The Fillmore sign go up in this city,” said Craig Schmitt, principal architect at EwingCole. “It was important to us as a design team to make sure that we made this a premier venue that exemplifies both the Fillmore reputation as well as Minneapolis.”

Designers drew their inspiration from the venue’s site – an abandoned rail yard formerly used in the logging and flour trade nestled along the banks of the Mississippi River. While each new Fillmore pays homage to the original San Francisco Fillmore’s identity through its signature crystal chandeliers, red velvet drapes, and a wood dance floor, this venue is influenced by the city’s local industrial and musical roots.

From the street, guests can see the signature Fillmore marquee glowing from the rear of the lobby. The sign was modeled after the city’s famed Grain Belt billboard alongside the Hennepin Avenue Bridge and provides guests with the perfect “Instagram moment.” Guests can grab a bite at the Trax Burgers & Bar or make their way through the music hall’s entrance, framed by industrial-style glass inspired by the windows of the city’s 20th Century flour mills.

As guests enter the music hall, they are left awestruck by the scale of the soaring ceilings, four glistening chandeliers, psychedelic neon murals lining the walls and a concert stage framed by a proscenium of thick steel trusses resembling Minneapolis’s many bridges. Flanking the stage along the outer-edges of the dancefloor are two of the venue’s four bars – clad in reclaimed timbers that frame insets of recycled leather.

“The custom murals behind the bars are some of the most unique that we’ve designed and commissioned to date,” said project designer Ryan Leichtweisz, RA. “They draw their inspiration from the iconic poster artwork that The Fillmore made famous in the ‘60s blended with a modern street-art style.”

A third bar can be found on the mezzanine level in the main hall. Three large mirrors hang behind the bar on dark-brick walls, reflecting the lights from the stage while acting as menu boards highlighting available drink and food specials. The dim, orange glow of vintage theatre lights adds to the urban-industrial feel.

Up the staircase to the mezzanine, guests are greeted by a dramatic, floor-to-ceiling mural of Minneapolis music legend, Prince. Bathed in purple light and painted over a collage of old and new Fillmore show posters, Prince’s eye acknowledges guests as they pass and enter BG’s Lounge – the VIP room of the Fillmore.

BG’s Lounge pays tribute to area artists as well as the legacy of The Fillmore’s founder, Bill Graham. Unique to this Fillmore location, BG’s Lounge has windows overlooking the street below, inviting passersby into the space through the sparkle of the lights inside. At its center is a four-sided bar beneath a large, tiered, and circular chandelier. The mosque-style chandelier’s descending tiers draw one’s eye toward the pyramid of glowing liquor bottles at the center of the bar below.

Behind the bar is a cozy, raised seating area for VIP guests. These banquettes are separated by red drapes that can be drawn closed to create more intimate seating nooks. Behind each banquette is an enlarged Fillmore poster featuring an artist or a band with ties to Minnesota, such as Lizzo or The Replacements, commemorating their performance at a Fillmore theater. Lighting the posters are four “chandeliers” that are adorned with cascades of bicycle chains – a nod to the North Loop neighborhood’s avid cyclists.

“We wanted to make sure that we created a venue that was unique for this community, one that paid respect to the first Fillmore’s origins as well as celebrates the regions musicians and artists,” says Shannon Noon, interior designer at EwingCole.

EwingCole, in practice for nearly 60 years, is a nationally recognized, fully integrated architecture, engineering, interior design, and planning firm of more than 450 professionals in Baltimore, Charlotte, Irvine, New York, Raleigh, Philadelphia, and Pittsburgh. Our multi-disciplinary practice is built on the core values of professional excellence, design quality, and collaboration. Our goal is to provide the best total solution for our clients, the community, and the environment.