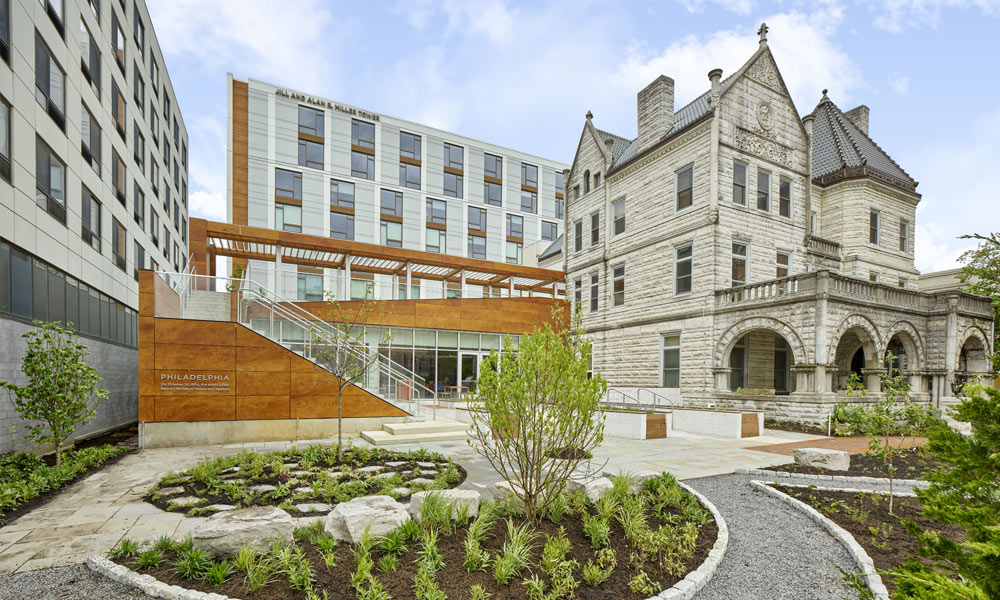 Posted at 17:51h in Press by Zach Deritis

Like the 300-plus Ronald McDonald House Charities (RMHC) worldwide, RMHC of the Philadelphia Region provides temporary housing to families with children receiving medical care at nearby healthcare facilities. The organization’s West Philadelphia location opened in 1974 in a historic mansion, with additions made over the years. In 2018, RMHC teamed up with EwingCole (Philadelphia) to further expand the house’s footprint to enable the organization to grow from servicing 800 families to 1,900 families a year.

The 93,000-square-foot project, which was completed in January 2020, includes a new reception area, 96 family bedrooms including 12 with wheelchair-accessible bathrooms, and eight protected patient suites on an isolation floor for immunocompromised individuals. Additionally, the existing buildings were renovated and a two-tiered garden and patio were added between the tower expansion and existing mansion, providing a buffer from the city as well as a gathering place for families. “The project program expands the existing facility from a house to a community,” says Saul Jabbawy, principal and director of design at EwingCole.

The design incorporates positive distractions as well as daylight and views via skylights and windows. Furthermore, the existing building’s first floor was renovated with family and play areas spread throughout, and a new kitchen was added for use by a guest chef or families.

The design also incorporates environments with varying levels of privacy to support different residents’ needs and provide places for respite and engagement. “Some of the locations involve more active architectural interventions, colors, and design elements, while others are quieter, allowing individuals to engage quietly with a family member,” Jabbawy says.