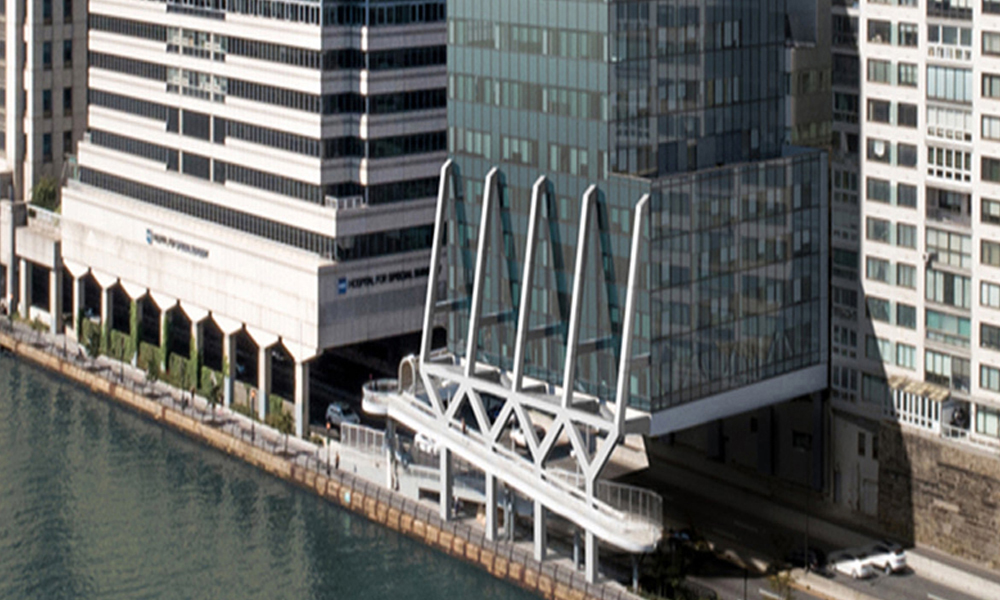 Posted at 18:33h in Press by Zach Deritis

There will be more rooms with a view for patients at the Hospital for Special Surgery.

There will be more rooms with a view for patients at the Hospital for Special Surgery. The pre-eminent facility for musculoskeletal health and orthopedics, a New York institution since 1863, is embarking on a spectacular waterfront expansion.

Aided by a $35 million gift from the Anna-Maria and Stephen Kellen Foundation, at the recommendation of philanthropist Marina Kellen French, the hospital plans to break ground in October on a 12-story building to rise over the East River. The $200 million project is the centerpiece of a $300 million modernization of the HSS campus, which includes a dozen buildings on the East River between East 71st and 75th Streets.

The structure’s 100,000 square feet of floor space will bring the hospital 25 percent more operating capacity. It won’t add beds, but it will provide more elbow room to increase the number of private patient rooms and to more efficiently reconfigure operating rooms, doctors’ offices and clinical and research facilities.

HSS’ president/CEO, Louis A. Shapiro, called it a “transformative” addition to the campus.

“It positions HSS to do what we do best well into the future. It will allow us to give our patients who come from around the world the very best care through the next set of decades,” he said.

The mini-tower will connect to the hospital’s existing main building, which also straddles the FDR Drive, with a third-floor skybridge over East 71st Street. The plan was approved under the city’s Uniform Land Use Review Procedure back in the 1990s and has all necessary permits.

The addition designed by EwingCole architects will take two-and-a-half years to complete. “We’re ordering steel,” said HSS surgeon-in-chief emeritus Dr. Thomas P. Sculco. “It will be amazing for our patients, not only for the facilities, but for the views they’ll have over the East River.”

The project was on the hospital’s wish list for decades. “We’ve owned the air rights for years and now, we’re finally able to do this,” Sculco said.

Remarkably, no word of the plans leaked out in advance. Fortunately for neighbors, the project won’t block views from nearby apartment buildings — stopping short of 530 East. 72nd St., for example.

Construction will, however, require temporary removal of the pedestrian crossbridge that links East 71st Street with the river esplanade. Shapiro said it will be “replaced and be spectacular” when the job is done.

The building will stand on a platform to be constructed over the FDR. It’s an engineering challenge, but, “Remember, we’ve done this before,” Shapiro said, referring to the HSS main building that rose over the highway in the 1990s.

HSS executives credit French for providing the necessary dough to get the project off the ground.